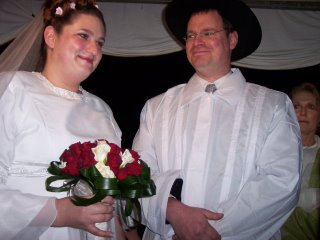 Yaakov & I are married. Really! The wedding was incredible, and now, we're married.

There is so much to tell tht I hardly know where to begin.

The day of our wedding was a busy day, filled with last minute preparations, hair, makeup, the usual.

People came to the hall, and it was wonderful seeing all the people who really cared and came out to see us get married. I feel truly blessed to have so many wonderful friends.

My sister was at the bedekin and the chuppa, which was very very important to me. After that, she had to go back to the hospital to feed her baby, but the important thing is that I didn't have to get married without my sister.

The wedding was filled with juggling, fire-eating, great music, and great "Shtick."

Yaakov juggled for me, and my neices and nephews sang for us. Yaakov sang "Aishet Chayil" to me... The evening was filled with so many incredible little details that I can't describe them all. Over the next hours and days, I will be posting more pictures... For now, I can tell my loyal readers that we are very happy.

And pretty tired. This getting married business is stressful.

My sister had a beautiful baby girl today.

My dress is waiting for me at the hair/makeup person's house.

Wishing I could write...

I have so much to say, and yet, I'm having trouble getting out a single sentence.

Everything is going according to plans, and nothing is.

My sister is spending this Shabbat in Jerusalem in the hospital, waiting to be induced so that she can deliver.

For my Shabbat Kalla, I find myself surrounded by friends, and yet more alone than I could have imagined. I had planned to have my sister's older daughters with me, because I knew that she couldn't make the walk now, in her 9th month, but they are with one of my brothers, away from here.

I should be happy. My sister, with G-d's help, will be having a baby soon. But right now, thinking about spending my last Shabbat as a single woman here without her, I can't stop crying.

Next week, with G-d's help, I will be with her on Shabbat, and either she will be naming a baby girl, or at the bris of her baby boy, and I will be spending my first Shabbat as a married woman, enjoying the seven blessings. Next week, things will be better, I pray.

But right now, I really miss her.

some of my friends thought that Yaakov's stuff moving in meant that Yaakov had already moved in...

Alas... it was just his stuff.

I have to wait one more week (it's after midnight now) before I get the man...
for now, I only have all his stuff...

8 days until the wedding. Really. A week from tomorrow, I am getting married. Un be lievable!

How's it going?
O moved most of her stuff out last night. Yaakov's stuff is coming in today, so that when his friend arrives this evening, there will be enough room at Yaakov's place to allow said friend to sleep on a bed rather than on the treadmill.

I spent last evening at a birthday party for my nephew (turned 7), followed by some serious furniture moving when I got home. The house is closer to what it should be, although there is plenty more to do.

Then, on my new bed (since my old one is currently lying on its side in the living room waiting for O's room to be clear), I tried to get a decent night's sleep. Sadly, it was a complete failure, both because I'm filled with moving-day jitters (although I'm not moving), and because I got a lovely head cold.

In addition, I keep wondering who I should have invited who I didn't, who didn't get invitations yet, what I should do about ... oh I'm sooo lost. Should I have invited this one? Will she be upset because I invited that one who's in the same category as she is? How about the other one? They're friends! ARGH! it's very confusing!

I discovered that someone got very hurt about not being invited so I ended up inviting the injured party despite not having intended to.

I wonder how many of those will surface after the wedding. I just don't know... it's all too much... I'm beginning to think that Yaakov's original idea of eloping was a better plan...

But then again, there's another fitting today. I get to wear that beautiful princess dress and I get to be the center of attention for a whole evening... It's gonna be cool.

Plus, last night at the birthday party, they sang for me. That was nice.

I just can't believe all this is really happening. I really hope this cold clears soon.

Each year since I've been in Israel, Purim has been a sort of time of crisis for me.
The first year I was in Israel, Dizengoff Center was bombed Purim eve (1996). The phone lines went down, and in those days before cellphones became ubiquitous, I remember feeling real fear, not knowing where friends were.

I remember going to a megilla reading where no one used noisemakers, where everyone in the entire synagogue banged on the walls, beating our anger into the floors, the benches, the walls. I remember crying that night, and then going to my brother's apartment where our Purim joy was turning off the radio for an hour and a half to watch The Neverending Story.

While no other Purim has been that traumatic since, I can't remember a "good" Purim since I made aliya either.

But this year, things are different. This year, G-d was reasonably kind to us, and there was no major trauma. This year, megilla reading in shul was packed and noisy, and I ended up standing outside near the door, but I was able to hear the reader, and he did a great job. I went home and got a great night's sleep. My costume came out pretty good, although nobody could figure out that the animal with the fur and floppy ears that wears a collar with a tag is a ....dog... go fig.

Anyway, Purim morning, we had our annual family reading. The costumes were great. My newest neice celebrated her first birthday by pulling a duck off of her cake - the cake was a bathtub with three cookie ducks floating in it.

Then I went to Jerusalem for the second round of Purim. Tonight, Yaakov was the juggler for the "Women in Green" Costume Ball or some such. This is the first time I've seen him perform his juggling routine. He's quite good. Although he didn't do many tricks that I haven't seen before, watching him perform it as a show was really special. Everyone kept telling us what a sweet couple we are, and I believed them. We are a sweet couple. Not because we're mushy, but because we know how to joke together and how to help each other, and because we genuinely like each other.

This year was an almost perfect Purim. Next year... next year Yaakov will come home with me after the party. and that will be a perfect Purim.
Posted by Leah Goodman at 1:38 AM No comments:

Munich (not the movie)

My mother and youngest brother (the one who is "only" six years older than I am) are in Munich now.

My mother took her laptop and her digital camera, so I've already seen pictures. Munich looks beautiful. The city is covered in snow, and it seems so peaceful and quiet. I haven't been outside in snow in six years now, and the pictures make me miss the snow even more.

I love snow. One of the hardest things about moving to Israel was saying goodbye to the snow. This winter, it hasn't even snowed in Jerusalem. I haven't had a chance to go up to the Hermon, but friends who've been there say that the snow is all mashed up and filthy so quickly that it's no great shakes.

I've never been skiing or snowboarding, but I'd give a lot to spend an hour outside sledding in the snow, having a snowball fight, building a snowman, and then come back in to a nice mug of hot cocoa. Some things from childhood never leave you.

But would I want to relive my beautiful American childhood in Munich? For me, the shadow of the holocaust hangs over all of Germany. Over Munich hangs the pain of the terrorism that took Israeli lives.

And yet, my connection to Germany is stronger. I was born in Germany. I lived there until I was about a year and a half old. In Germany, I took my first steps, and in Germany, I spoke my first words, many in Hebrew.

So maybe, a little step into nostalgia in Germany wouldn't be so far off the mark. But then again, what could be better than a snowball fight in the Holy City of Jerusalem?!

Another Shabbat in Beitar Illit

I think I'm getting the hang of this thing. It's nicer now that I'm not just Yaakov's "friend" but his "Kalla."

People seem to think that Yaakov and I are a good match, which is always nice to hear. One of Yaakov's friends was very concerned about the whole zionism issue, because we fall out a little differently on the issue. On the other hand, we both left our comfortable lives in the old country to live here, so the biggest part of that issue is something we can agree on - we agree that Jews belong in the land of Israel. How we feel about the political entity of the State of Israel is another issue, and we'll probably manage well enough with that.

At any rate, I feel very positive about things, and I just hope I won't stress too much about the wedding...Thank G-d, I'm really not stressed about the marriage.

Last night, we had our tasting, which was very difficult for me, because I felt very overwhelmed. On the other hand, I was overall pretty pleased with the food, so all is well.

I didn't end up with a china pattern, b/c the set I wanted was inexpensive, so everyone who's going to chip in already did. (they already got me service for 12). It's pumpkin-soup colored orange...

I hope Yaakov likes it. If not... well, that'd stink some.

I found a cool bonus on this site. They give you $25 to play with, and you can use it like totally regular money. If you're good at backgammon, you can get real money without putting up any cash of your own... How cool is that?!

anyway, that's the news for today
t.c.
Posted by Leah Goodman at 1:27 PM No comments: