It's a Frazzle Razzle Day!

It's a Frazzle Razzle Day!

Well, the song is nicer - The song is called "It's a Brazzle Dazzle Day" and it's from Pete's Dragon - which is, by the way, a total must-see movie.

Anyway, it's been a frazzling day.

First, I have this huge aggravation with my bank & an insurance company...
If you're not interested in this story, scroll to the end of the green.

Four or five months ago, I cashed out an insurance policy that wasn't doing anything. I sent in a whole boatload of forms, and they said they had everything except the processing fee. I asked if the processing fee could be taken from the cash in the policy, and the secretary (or whoever) said that she'd check and get back to me. She didn't get back to me, so I assumed it was fine. Then, after about 6 weeks, they sent me a letter that I needed to pay the processing fee. So I sent them a check. Then they sent the check to the bank. On the day it expired.

Next day, I go in, get to the front of the line, realize I don't have my ID, go home, wait in line another 25 minutes, and they tell me "we don't have it."

Fine. I go back two days later. They still don't have it. They call my branch. The person from my branch says "I sent it to Modiin. It's there."

Yaakov and I go to Ireland. When we come back, I go to the bank AGAIN. They STILL don't have it (now 2 months later).

Okay. Another week. I call the insurance company and ask them to reissue the check. Sure, no problem, just get the bank to fax us a letter saying that they couldn't cash the first one. Oh, and do it next week, because the company that we work with is on vacation this week!

Okay. It's Sunday. I call the number. No - we can't do that, only your branch can do that, and they're not open on Sundays.

Can you say AUGH?!

Next annoyance of the day. For reasons inexplicable even to myself, I let my New York Driver's License expire completely so it's not renewable, and never got an Israeli license. So now I need to get an Israeli license as if I've never driven before. (Which, in and of itself, is frazzling, but my bad, my problem.) So I go to the office where you're supposed to go to start the process and, after I wait in line 15 minutes, they tell me that that specific part of the office has moved - about 5 blocks away. Fortunately, my mom was with me - a real blessing, since I have no sense of direction. I literally don't know the difference between right and left without giving it serious thought - and I've spent time trying to teach myself. So another five blocks, plus another 20 minutes in line, and I take the eye test, get my picture taken, and now for just US$600 (to pay for 28 lessons), I can get myself a license... well.. of course, I need the written test, the driving test, and a physical, but ok...

Next, my mom drops me at home so I can get ready to go to the gym. I decide I really want to swim. So I get all my swim gear ready, except I can't find my goggles. Yaakov cleaned the house on Friday, and I really appreciate it, but I have no idea where he put my goggles!!!!!! Okay. no swimming. I'll go walk on the treadmill. All is well. Unpack, repack with different stuff. Ready to go. My parents pick me up, and I get to the gym, and I've forgotten my earphones. The ONE reason I go walking EVER instead of swimming (and walking is better for me, I know) is because I can watch tv/listen to music. I'm dying for a Swimp3, so I won't be so bored underwater. Anyway, my dad made some remark about how I should go walking without headphones to punish myself, and instead of just ignoring it (because it doesn't fit with any reality I can relate to) I let myself get angry. I hate that he can say something like that - and if it came from anyone else, I could just shake it off like nothing - and it can set me off. And of course, he's now angry that I got angry. GRRR...

And after all that, my blender broke. Let's see if I can find the warranty slip for it. I know where I *should* have put it. Let's see if it's still there.

So... I think I'm going to watch some tv and escape the universe for a while. Here's wishing all my readers a brazzle dazzle day (as opposed to a day like mine...)

This is my new MAN.
Isn't he DREAMY?? 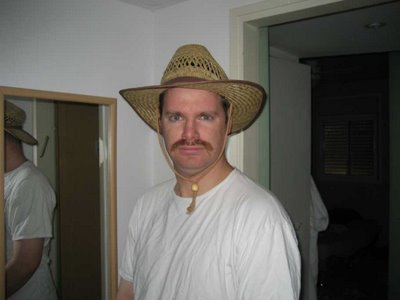 (for those of you who don't know Yaakov - this is a picture of him during time when he's messing around after a no-shave part of the Jewish calendar. And no, I couldn't kiss him with the caterpillar.)
Posted by Leah Goodman at 12:17 PM No comments:

What's a real blogger?
Is LittleGreenFootballs the kind of blog I should aspire to? Should I spend hours sifting through news to find things to interest my readers?

Should I make this a juggling blog where I can tell the world about my trials and tribulations with three clubs?

Should I take it back to its original state, where it was a diary? I'm soooooo lost.

and would someone freaking order from my amazon site already!

Those who do not Learn from History are Doomed to Repeat it.

So today, we enter another armistice agreement. It is not a peace treaty. It is a temporary cessation of hostilities, at best. The two IDF soldiers who were kidnapped - the immediate cause of this war - have not been returned. The Hezbolla has not been disarmed, nor have they in any way intimated that the complete destruction of Israel and all Jews is off of the top of their priority list.

And now, Ehud Olmert will begin the appeasement process again, as soon as he possibly can. Appeasing a bloodthirsty enemy is always the best way. Looking at the most recent UN actions, we can easily tell who Kofi Annan looks up to. 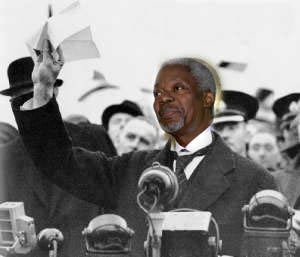 Kofi Annan declares "Peace in Our Time"
Posted by Leah Goodman at 7:36 PM No comments:

Play Dead! (or More on Misreporting)

Some dogs just can't learn how to play dead.
Apparently some people have the same problem too.
See below: 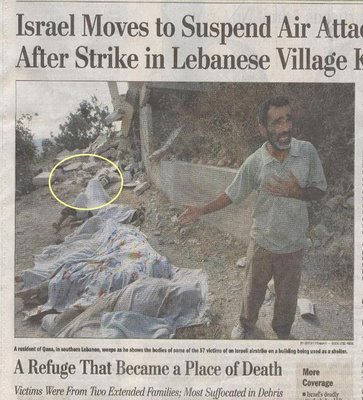 Posted by Leah Goodman at 1:34 PM No comments:

I really meant to write more about the EJC. It was such an amazing experience that I can't imagine relegating it to memory without some more writing, but then...

The thing is that in the middle of my honeymoon, the news started to pour in. We heard that two soldiers had been snatched by Hizbolla, and we heard that missiles were falling in Nahariya.

By the time we got back from our trip, we were coming back into a war zone. And it's so strange. I'm glued to the news now, wondering what will happen, what can happen. It's very surreal. There are missiles falling in Haifa, a city where I've spent a good amount of time. Here, there's quiet.

The mood here is very subdued. We go about our daily lives, and we do what we can to help the refugees from the north. We don't call them refugees. We call them guests, but the fact remains - they are here because their lives would be in danger if they were home.

The world screams and shouts about the fifty reported dead. well, give or take 49 or so. It was a huge massacre, except for the part where only one person died. And in Qana, the sixty or so were also less than 30 when the final count came in. Plus you can't forget that whatever the news, Reuters, at least, isn't above distorting it.

Turns out, now that the cat's out of the bag, Mr. Hajj - a freelance photographer from Lebanon, is being found guilty of more and more fraud daily.

Power Line is showing two pictures taken at the same scene, of the same bombed buildings. That would be okay, except that Mr. Hajj claimed that they were taken over a week apart. Let's face it. Most of us don't remember which building was destroyed. We see two pictures of destruction on two different days, and we believe that two different things were destroyed.

Too bad Israel is forced to stick with facts, and we're a little too sensitive to parade our dead around.

At any rate, life in Israel continues, weirdly, but steadily.
Posted by Leah Goodman at 2:33 PM 1 comment: