In addition to being lazy, there's another reason I haven't blogged lately. I took a trip to the old country. That's right, I spent some time in the good old US of A. (and Canada, but you get the point.)

There were a lot of weird things about the trip - some good, some less so. First, this was the first time I ever arrived in the United States that no one picked me up at the airport. This is partly because we arrived at 6am on a Sunday morning, but more because I just don't have family in the New York metropolitan area anymore. The only person who could have picked us up was my Aunt Vicki's friend Phil (Vicki decided to give up her car several years ago.), and he would have had to leave home around 4:30am, which seems like an awful lot of trouble to go through for your friend's niece.

Next thing, I've never arrived at JFK and not gone to visit my Saba (grandfather) in Queens. On the bus from the airport into Manhattan, we went fairly close to my Saba's old neighborhood. My whole mind started fighting and screaming about this. I know that my Saba passed away over 5 years ago, and more than that, I was there the day we took him from his house the last time, to help him make Aliya. He lived with my parents in our house for over a year after that, and I visited him in his nursing home when that became necessary, and I was there when he was buried. Still, it felt so wrong to land and not visit him.

We got to Grand Central Station, then switched shuttles to Penn Station ("and lead us not into Penn Station...") There we got on the train to Trenton, from which we got on the Septic (errr Septa - South Eastern Pennsylvania Transit Authority) system, and met my Aunt Vicki in Philadelphia.

We took a taxi to her place, dumped our baggage, showered, and then.... I got to meet Shlomo. Shlomo is Yaakov's son. He is a beautiful child. 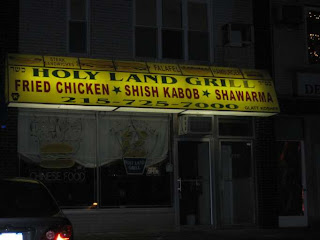 We took him out to dinner that night, at a restaurant that serves a little bit of everything (really, everything.) I mean, they had Chinese and shawarma and fried chicken and Philly (cheeseless) steak. It's kinda bizarre. So we went in and got some food, and I started to get to know my stepson. He's a very attractive child, and he's bright. It did drive me a bit crazy that he continually talked about football, even when other subjects were brought up, but that's ten-year-olds for you. Anyway, we had dinner and then we took him for a walk. We went to Toys R' Us, which my mother's family claims was named after my maternal grandmother's family, the Toizers (although in my grandmother's case, the name was changed to Tizer, but still, coincidence? I think not!)

All the toys there were pretty scary. They all move around and yell and do all kinds of things that toys aren't meant to do, plus there are these nasty Bratz dolls everywhere who teach children how to dress like prostitutes. My friend AbbaGav has a better concept than Bratz. Anyway, Shlomo decided that what he really wanted for his birthday was a digital camera. I personally thought it wasn't a great idea, since 1. he's 10, 2. A camera isn't a toy 3. He doesn't have a computer to hook it up to. However, I let Yaakov make the decision. We decided that Toizer Us isn't the place to get a camera anyway, so we left the shopping until the next day and took Shlomo home.

To the left, you can see Shlomo maki 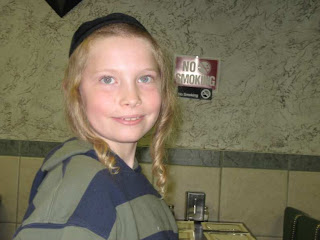 ng a political & health statement... Actually, you can see that I just don't pay enough attention to the background...

Anyway, there's much more to tell, but I thought this would be a good start for now.

t.c. Back from America!