Kosher Tour to Vietnam and Cambodia – All Included, in English or French!

Shai Bar Ilan Geographical Tours will be offering, for the first time ever, a kosher tour to Vietnam and Cambodia in English and French. All meals, flights, hotels, and day trips included!

FOR IMMEDIATE RELEASE– Sep 28, 2008 – Shai Bar Ilan Geographical Tours is offering a very special tour to Vietnam and Cambodia for English and French speakers this fall.

The dates for this incredible 18-day trip are November 24- December 11.

All meals are included and are kosher. Tours are appropriate for Sabbath-observant Jews, although there is no requirement to keep Sabbath or kosher while on the tour. The tour will be guided in two separate groups – one with a French-speaking guide, and one with an American English-speaking guide. As an added bonus, anyone who signs up before Saturday, October 25, 2008 will be automatically entered in a drawing for a free woven blue and gold Cambodian tablecloth, and will receive a free genuine pearl necklace!

Tour leader Dr. Rona Michelson says “Be prepared to see a country unlike anything you could have imagined. Vietnam is a country that has majestic mountains, verdant rice terraces, colorful ethnic minorities, beautiful beach resorts, bustling cities, and an ancient culture. We will board a boat to see Halong Bay, one of the most beautiful places in the world. We will see river life along the Mekong Delta. And to cap the trip, we will see the magnificent buildings of Angkor and Angkor Wat. This is an unforgettable experience!”

Be sure to look at the pictures at: http://picasaweb.google.com/DrSavta/VietnamAndCambodia

All this is available for under $4500, including flights from Israel, per person in a double-room! Travelers joining from other countries will receive a price reduction and assistance in organizing flights to join the group.

For a detailed itinerary and pricing information, see http://10topics.com/vietnam-kosher-tour.htm

I Don't Want to Hurt You. I Just Want to Make You Kosher!

Recently, DrSavta quoted one of the funnier films from my childhood...The Frisco Kid.

So... I haven't been hunting chickens... Instead, I've been hunting chicken pot pie recipes...
My friend Scott found this one, which looks terribly complicated. Here's the problem. Among the ingredients are butter and milk, which... for those who keep kosher, don't work well with chicken.

Also shortening is not easy to buy and is not part of my standard cooking repertoire.

So, chefs and chef wannabes, can I make the crust with just margarine? Should I use "butter flavored?" Should I make it with entirely shortening?

For the filling, should I substitute with margarine or is oil ok?

For the "milk," should I use rich for coffee, pareve cream (there's one without sugar), soy milk, coconut milk?

Who Uses a Synagogue? 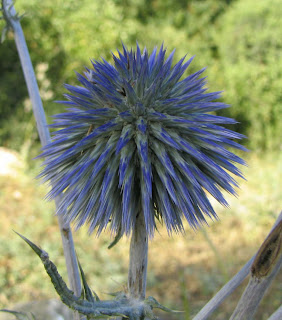 There are synagogues in town. The Israeli government mandates a minimum number synagogue space for a given population. One of the older synagogues in town is my synagogue. It was intended as a Sfardi-Ashkenazi synagogue, to hold one service for everyone. There was a basement designated as a reception room. For a while, all was well. Then people moved into the neighborhood. The synagogue overflowed. No problem. We split the basement into a separate service. The Ashkenazim were the smaller group, so we got the basement. Excellent. We have a space. They have a space. All was well.

People raised money to build an ark, buy a Torah-reading table, and benches for the men's section. The women's section uses plastic keter chairs. Still, all is well.

We have a makeshift mehitza - a translucent curtain that hangs from a piece of wire.

We have 40-50 families who pray at our shul (Yiddish for synagogue). On a regular Sabbath morning, we have two minyanim (services), one at 6:45am and one at 8:30am. On Friday nights, the men's section is packed, but far from overflowing. When there is a Bar Mitzva, the guests generally find seats in the men's section, but the women's section often becomes quite zoo-like. This is mainly because the chairs move easily. Most of the Bar Mitzva's in our shul are of neighborhood families who are not members of our shul. That's fine. We welcome every Jew.

The worst is Yom Kippur. We are a synagogue. It is the high holy days. We do not turn Jews away from a synagogue on Yom Kippur. We do not tell old ladies that they cannot sit down because they haven't reserved seats. I know there are places that do that, but it goes against everything I believe in.

So each year, the crowds get worse. Those of us who do pay for seats can't get to them. I'm told that the men's section is just fine, but for those of us who are banned from that section by virtue of our gender... getting into the synagogue on Rosh Hashana morning and Yom Kippur evenings is simply horrendous.

Which is why I get a little irked when non-religious people say that synagogues won't serve the majority of Modiin residents. Actually, if there are literally one hundred people trying to shove into my synagogue beyond the number already packed in by design, then take a count. The majority is speaking loud and clear.

*Bonus points to anyone outside of my family who can explain why the picture is relevant.
Posted by Leah Goodman at 2:51 PM 9 comments:

The bad news first... My hamster, Mishmish, committed suicide. Seriously...she died in a botched escape attempt from her cage. It's very sad and kinda gross. Fortunately, my dad decided to join the ZAKA hamster squad, and I'm no longer quite as traumatized.

The good news... is that there's a great opportunity to go to Vietnam & Cambodia on a Kosher, shomer Shabbat trip!

If you want to go to some really exotic places, eat jackfruit, and have a great time, this is THE trip. Don't miss out!
Posted by Leah Goodman at 11:31 AM 6 comments:

This is a far cry from my usual life update- navel contemplation, but I feel like I need to step up on my soapbox about something.

Over on Wolfish Musings (and, yes, I desperately need to update my blogroll), Wolf was talking about the statement of Rabbi Pinchos Lipschutz saying that YU is acting "like Amalek" by allowing a professor of modernist American poetry, Jay Ladin to return after a two year absence during which he has begun taking hormones and has transformed himself into Joy Ladin.

Do I agree with Professor Ladin's behavior? It's an interesting question. I think if I were a parent and my child made that choice, I would be quite upset. As someone whose life is completely unaffected by it, I really can't judge... and that's my point here.

Rabbi Lipschutz may be able to say that there is a halachic problem with it. Transvestism is absolutely forbidden by the Torah, "A woman must not put on a man's apparel (beged ish), nor shall a man wear woman's clothing; for whoever does these things is abhorrent to the L-rd, your G-d." (Thanks, Jewish News Weekly, for the translation.)

However, lighting a fire on Shabbat is also forbidden. We may say that one is labelled as abhorrent (to'eva) while the other isn't, but it is abhorrent to HASHEM, not to humanity.

Transvestitism and homosexuality are, simply put, not moral issues. They are religious issues. It is true that these are non-standard behaviors, but as long as all related acts are between consenting adults, the ramifications should be left between the doers and G-d. It is not our place to judge people, any more than we should judge a person who drives on Shabbat or eats a cheeseburger. We may cry out for their neshama, but we do not have a right to mistreat them or hurt them.

For Yeshiva University to fire this professor while there are other professors on staff who eat non-Kosher, drive on Shabbat, aren't careful about nidda, or are careless about lashon hara would be, simply speaking, hypocritical.

For the Jewish community to raise outcry against a transgendered person while child molesters are still not being properly dealt with is beyond hypocrisy. It is evil!
Posted by Leah Goodman at 9:12 AM 6 comments:

Over at The Muqata, Jameel is helping out in a new initiative taken by the Israel Rabbinate to help women whose husbands have disappeared to avoid giving their wives a proper divorce.

Someone near and dear to me was an aguna for fourteen years, so this is a subject very close to my heart.

Please look here to see if any of these men* are hiding in your community.