He Was Always Ok 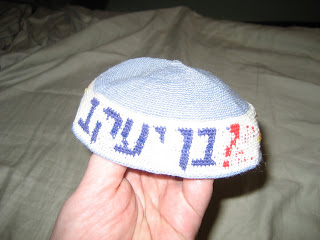 Yaakov and I have friends whose names in Hebrew are Yaakov and Leiah, and they're expecting, G-d willing, in a little over a month. I let them know that I had a special kippah appropriate for a brit for a baby whose father's name is Yaakov. (It says "? son of Yaakov") See, it's cute because we don't know the baby's name yet at the brit. All we know is the father's name (one hopes).

Anyway, I made this for Ephraim's brit, and because of everything that surrounded his birth, the running to specialists, the extreme blow dealt to me by unsympathetic and insensitive doctors, the misinformation I found on Google and had confirmed by stupid doctors, and the simple fact that for a time, all I could see of Ephraim was his one small eye, I didn't ever use it. 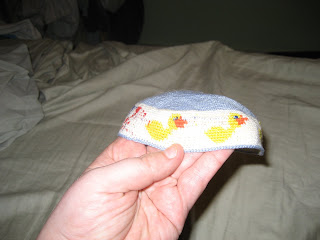 So I was hoping that someone else could use this kippa, because it took a lot of work to make it. When I offered it to the other Yaakov and Leiah, I told them why it never was used for Ephraim, and the other Yaakov asked "How is Ephraim?"
"Ephraim's ok," I answered. "He was always ok. I was the one who wasn't ok."
and it's true.
Posted by Leah Goodman at 9:10 PM 3 comments: