Getting it off my Breast... err.. Chest

Sometimes I feel like having a baby makes your private life no longer private. And I don't mean the fact that the baby is with you all the time. Sure, that makes for a challenge with the intimacy, but that's really okay with me. I can meet challenges.

What I don't like is the fact that other people, strangers, suddenly feel that because they can assume you've had sex (by the fact that you're pregnant, a parent, etc) they now have the right to intrude on your whole life.

It starts with the pregnancy. People feel like they have the right to touch a woman's pregnant belly as if it were public property. I literally had to tell a man to "back off" my belly. And of course, everyone has to ask what you're having. And if you don't tell them, then they tell you. (Just for the record, everyone told me I was having a boy.)

You'd hope that they'd quit once the belly is gone, but no... they find new ways to intrude. First, they touch the baby without permission, sometimes with dirty hands, sometimes while smoking. I try to keep Kinneret away from smokers... Oh, and you gotta love the people who want to touch her while she's sleeping! Hello? Would you like it if someone decided to prod you in your sleep? She's a baby, not a puppy, for heaven's sake! 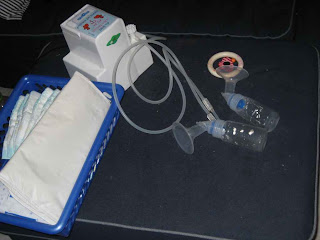 The other way that they intrude is the ever-present question of "Are you breastfeeding?"

Usually, I try to keep my private business, well, private, or at least off of this blog. But the situation has gotten out of hand. I'm attacked with the question so often that it just drives me bonkers.

When I was in the hospital after an excellent delivery, I had little success latching Kinneret on. I tried and tried, but I never heard a swallow. Right before I was released, the lactation consultant at the hospital tried to help me, and we were able to get Kinneret on, but she didn't swallow, indicating that she didn't get any milk. The consultant told me to get a pump and pump 6-8 times a day to bring in a supply.

I tried with no success. Two nights later, I got Kinneret on, got a latch, heard a swallow, and then Kinneret started screaming so I gave her a bottle. When I got up, I saw that I was sitting in a puddle of blood. The bleeding got so bad that I went to the ER that night, and my mom and I spent the whole night there so that the doctors could stop the hemorrhage.

When I tried to nurse again, there was nothing.

Since then, I've been working with a lactation consultant, and pumping to increase the supply, but the most I've pumped in a single session is 20ml. Just for reference, Kinneret generally eats 120-160 ml of milk at a feeding. I'm still working at it, but it's just not going great.

Usually her first feeding in the morning starts with some time on me, but then she'll eat a whole feeding from a bottle after that... so go figure.

Anyway, my point is, I'm sick of people telling me all sorts of stuff about breastfeeding, because I'm sure it's wonderful if you have a body that cooperates and doesn't try to bleed itself to death and all that, but when the body just won't do the job, the whole thing is so depressing.

And, when I need additional comfort, I think about the people who stick their nose in my business, and I imagine smashing my fist right into their obtrusive nose. 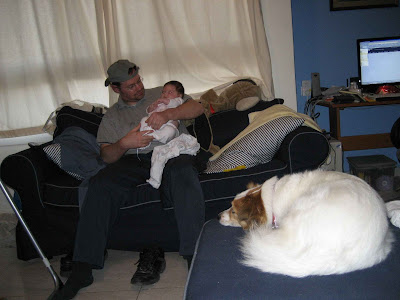 Kinneret and Tatty (with Poofy looking on). 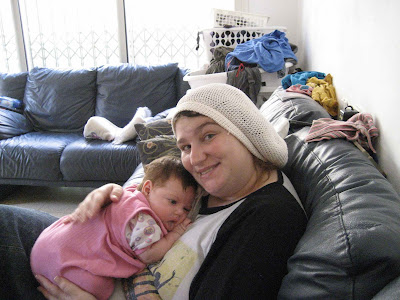 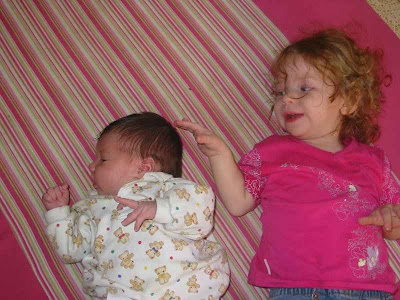 It's been slow going in the blogging arena. Kinneret keeps us on ou 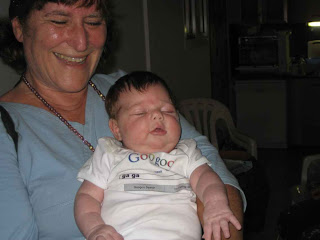 r toes, and there's loads to do. Kelli from Land of Milk and Honey has officially been adopted as my new little sister. She and her husband are here in Israel, comfortably moved into their new home in Modiin. My mom and I have been doing our best to help them get things organized.

It's hard work setting up a house. I've never done it from scratch myself, but I've come close. They literally had nothing, though - no oven, no microwave, no washer/dryer, fridge, nuttin'. So we helped Kelli get a whole mess of price quotes for appliances online. Then we took her to the appliance shop and got them to make us a package of all the nice appliances for about the cost of the quotes we'd collected.

Next, I've been helping them get their cable internet set up. It's not working yet :(

So that's been keeping me busy.

Last week, on Wednesday, my mom, Jeremy, Kelli, and I took Kinneret to a Modiin Miracles baseball game. Sadly the game was called in the bottom of the 7th inning because of darkness. I think the Bet Shemesh Blue Sox were up by 1 run, but the Miracles were going to win!!! (the games are only 7 innings, and the half inning was the Miracles at bat.)

The big news for this week is the Kinneret smiles! She's not doing it consistently or anything, but she does smile sometimes!

The other big news is that my mom is going to China. Despite the lack of interest from my blog-readers, the trip is going, and my mom is taking my 13-year-old niece. I couldn't be happier for her! (Actually, I would be happier for her if I were a bit less jealous. Come on, CHINA?! I want to go to China!!!! But really, I'm very happy for her, especially because she's going to sneak me into her luggage...)

Having kids really does cramp one's style. I wish we could just go someplace exotic and fun, but Kinneret is too young to travel... oh well. Maybe next year.

Last Sunday, my juggler friend Scott got married!
To those who haven't been following my whole story, let me recap.
Scott and I once went out on a date. The next day, he left me an email saying that it was nice meeting me, and he thought I would do well to meet his friend Yaakov.
About 4 months later, Yaakov and I stood under the Chuppah, and Scott juggled for us.

On Sunday, Yaakov was able to return the favor, juggling for Scott and his new wife.

Kinneret and I were not up for juggling, but we did do a little dancing.

Mazal Tov to Scott and Natasha and their kids! 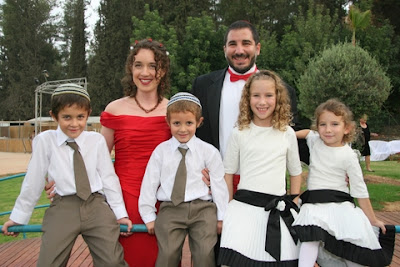 I've been asked to post this important info about an amazing opportunity to go to China:
When: Monday, August 20th - Wednesday August 29th.
Where: Beijing, China
Food: All food is kosher and prepared fresh every day.
Shabbat: Observance of Shabbat is made easy and comfortable by the experienced guides. There are tfillot, kiddush, and challahs as well as three traditional meals.
Why should you take this trip?

What you'll see:
What you'll pay: $1450 per person, Single supplement $295
What's included: Flight, hotel, and all meals.
What's not included:
This trip leaves from Israel. If you want to come from someplace else, the price without airfare is just $750 per person!!!!

Don't miss out! This may be the cheapest trip EVER to China. With the Beijing Olympics coming up, this deal will probably never be repeated!
Posted by Leah Goodman at 2:01 PM 4 comments: