The Good, the Bad, and the Beautiful

Passover is a great holiday. Seder this year was a bit hectic, as we piled 12 adults and 13 children into a living room/dining room area that seats 14 comfortably.

The Shabbat meals were fairly quiet, as Yaakov, Kinneret, and I hosted just my brother Ben. The food was a little sparse with no matza and all the bread eaten on plastic before the meal proper... (sorry Ben).

I love juggling! I love jugglers. They're great people. I love juggling festivals. I don't love camping, but I'm willing to make the effort, as long as I have enough food. I really really really don't love traveling on multiple buses with my baby and lots of luggage. However, we examined all of our options, and sent up a big bag with Scott, and we went up by bus on Monday morning. We left at ten am, made a few stops at the central bus station in Tel Aviv, and got to Gan Hashlosha at thr 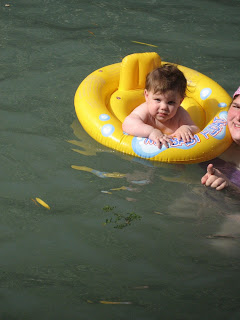 ee pm. It was hot and I was worn out from traveling, so Yaakov agreed to put together the tent and watch the baby so I could go swimming with Scott and his girls.

We swam. The water there is beautiful. The next day, I took Kinneret with me into the water. She was a little scared of it at first, but eventually, she calmed down and seemed to be having a good time.

The water there is beautiful, and there are fish in the water. The downsides to the convention: It was VERY VERY hot during the day, rising over 45 C (113 F). You can say "but it's a dry heat" as many times as you want, but when you're going through a liter an hour of water and you still don't have to go to the bathroom...

The gym, which usually stays cool all day got so hot that the few jugglers there wilted and could barely juggle. There was no air-conditioning available most of the time. The tent was so hot that I had a panic attack from feeling like I couldn't breathe the air inside of it. 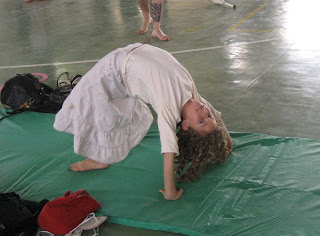 In the evenings, it cooled down nicely. Friends and I cooked meals, and there was plenty of food this time. (Thanks to the Bar Yaakovs, Trachtmans, and Seltzers for their cooperation in feeding me and baby K. Sorry there were eggs in the cake, vegans.) On Wednesday, I hitched a ride to Beit She'an with M. Trachtman, and we spent a long time in the well-airconditioned supermarket. I picked up a cake for my birthday (which was Shabbat, April 19th, so passed with little fanfare. Thanks parents for the new outfit, and thanks Rach for the pearls!) and told the Bar Yaakov and Seltzer children that anyone who wanted cake had to sing happy birthday to me. It was a neat party out on a straw mat in the cool evening air.

The best parts were swimming in the natural spring, making some new friends and spending time with old friends, and Kinneret's big moment! At one of the shows, there were some technical difficulties, so they asked volunteers to come up and showcase whatever they want in order to amuse people. (With some assistance from Yaakov,) Kinneret went up on stage, sat there, and held three small rings (linked together) in her hands. I announced "Kinneret with three rings" and she got a huge round of applause. As we took our seats, Kinneret was asked for her autograph several times.

The down sides of the convention... There were mosquitoes and other biting insects. I'm still bitten up. Fortunately, Kinneret seems to be bite-less, and Yaakov was more careful about not getting bitten (not to mention that the aforementioned panic attack led me to sleep outside the tent all three nights whereas Yaakov and Kinneret slept inside the tent). It was insanely hot. The worst part, though, was that Yaakov was sick, so we ended up going home a day early (which was a relief in some ways), and we missed the big show with the international guests. 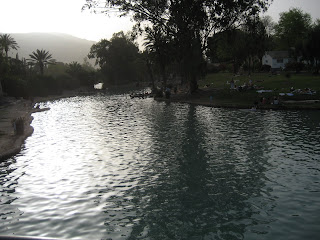 So Pesach is coming again, way too fast.

Mother-in-Israel said that I should post my favorite recipe, so here it is. It's a recipe for apple kugel that's so good that I would make it with matza even during the year. My mom says that it's from an out-of-print cookbook. It's not easy to make, unless you have a kosher for pesach food processor, but it's soooo worth the effort! I generally don't like sweet kugels, but this one's a real winner. I confess, though, that I have been known to eat it with vanilla ice cream...

Hopefully, I'll be writing some tips on how to stay sane for Pesach cleaning, and how to keep within budget over the next few weeks, but I have to get my legos out of the laundry (just kidding. We don't generally EAT our lego.)


For more great recipes, check out Spice and Spirit

Why I Can't Keep up with the Laundry

It begins in the morning. Kinneret is wearing the clothes she slept in. Her diaper is blessedly still holding. I change the diaper and feed her a bottle without mishap. I'm wearing my pj's, because I don't have to go out yet.

Yaakov has dumped his yesterday's clothes, undershirt, etc on the floor. I dutifully pick up the socks (which aren't actually standing up on their own, so all is well).

8am
Today's a sheet-changing day, so I strip the beds. N0 problem.

9am
Kinneret eats a yogurt for breakfast. She cooperates. There's not even a lot of yogurt on the bib.


10am
Naptime. I've finished the first load of laundry, including folding. Neither Kinneret nor I have changed clothes. We're doing great!

I take the silk blanket off of Yaakov's bed, fold it, put it away. He hasn't used a blanket in about 4 weeks. Heck, he's already complained that the flannel sheet I gave him instead of a blanket is too darned hot, even with the fan on.

I put clean sheets on the beds. We don't have enough pillowcases, so we'll have to wait for them to come back from the machine later.

1pm
change Kinneret's clothes. Into the pile they go. Cuddle some. Kinneret is tired, so she goes for a nap.
Put away clothes, realize that the next wash isn't in yet. Uh-oh. Put in the next wash.

4pm
Poofy needs a walk, and Kinneret could use some air too. Great! We'll go see how the new train station is coming along. I change into clothes (yes, still in pajamas up until this point.) Pajamas could do with a wash... into the pile they go.

4:30pm
We go towards the train station. After Kinneret's hat takes a few trips to the sidewalk, it goes under the stroller. Train station is not currently stroller-accessible. We'll have to take a look next week maybe.

4:45pm
There are loads and loads of ladybugs! They're really pretty. We count over 25, including 4 pairs in the process of "pairing up."

5pm
We get home, and Kinneret is hungry. I give her a bottle of milk which she downs in 2 seconds flat.

5:05pm
I pick Kinneret up because she looks like she needs a burp. She becomes a fountain. That bottle of milk... well, it's on the floor (and her, and me) now.
Change all of my clothes, get back into pajamas. Give Kinneret a bath, changing her clothes again. (and of course, when I went to get her into the bath, the diaper was dirty.)

7:30pm
I have an appointment. My mom comes over while I put Kinneret to bed, and then I get ready for my appointment (getting into new clothes). Pajama top is sweaty. Into the pile.

8:30pm
I come home, realize that I look like a wreck and want to look nice for Yaakov. Shower. Change into something nicer. Previous clothes were sweaty. Into the pile.

10pm
Bedtime. Change into pajamas. Previous clothes can actually go back into the closet. this time.
Posted by Leah Goodman at 5:50 PM 1 comment:

Get in Touch with Your Feelings