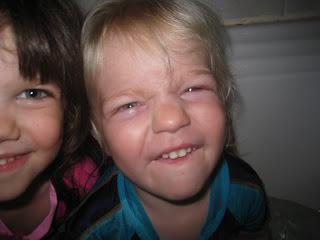 Today, after gan, I decided to ask the kids what we were going to eat for supper. This was mostly because I had no idea what to make. They came up with the idea of making spaghetti for supper, which made me realize that I didn't have sauce (we usually use the jarred kind). I decided to take the kids to the supermarket. I've never done this before. I've never taken them without a stroller. I've always had at least one of them restrained.

I was fairly terrified.

My list was very limited. Tomato sauce, tivol "ground", cheese, cinnamon gum if they had it (they didn't). That's it. We walked to the supermarket pretty much without mishap. Ephraim stuck with us and didn't run away. The kids obviously asked for cookies. And here's where the fates aligned. Two things happened. One, I happened to have both cake and cookies at home (provided by Kelli), and two, my kids happened to be angels. So I said "we have cookies at home" and Kinneret said "but I want cake" and I said "we have cake at home. Kelli brought us a cake." and wonders will never cease, she stopped asking. It even worked with cereal. She wanted the cookie cereal and I said "we buy corn flakes, and we have that at home," and she didn't ask again.

The kids asked for chocolate milk and I said "another day. not today" and they accepted that... Kinneret wanted to hold the sauce, but she accepted holding the cheese instead. Ephraim wanted to hold the cheese but he accepted holding the butter instead (how did that get on the list?) It was like miracle after miracle. Which is why, when I handed Kinneret her tivol ground to hold and Ephraim asked for one to hold too, I decided I wasn't going to press my luck, and we now have an extra package in the freezer. It won't go to waste.

The line was short and the kids didn't get crazy fidgety in line. The kids carried their share of the groceries part way home. They even almost sort of walked home decently. Times like this, I think maybe parenting isn't only for the absolute strongest and bravest. I think maybe it's something I'm actually capable of doing.

For the first time since the toddler phase started, I'm starting to feel like going out with my kids doesn't leave me feeling harried and worn out. I think I actually enjoyed going out to the supermarket with my kids. I might have even laughed a little.
Posted by Leah Goodman at 9:45 PM 3 comments: