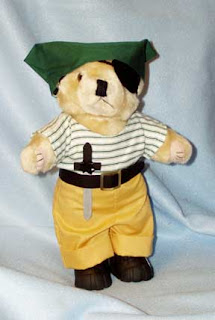 I've talked about how I take Ephraim to a clinic in Haifa for his eye. At the clinic, pretty much everyone has at least one eye that is "broken" in some way. Some, like Ephraim, have a small eye which needs to be enlarged. Others are cancer survivors who had to have an eye removed. In any case, pretty much every patient is one-eyed. Tuesdays are children's days, and there are a lot of toys. One of the toys is a big teddy bear. When I was there yesterday, I noticed that the teddy bear was missing an eye, and someone had taped an X of masking tape over the place where the eye had been.

I simply didn't know whether to laugh or cry.
Posted by Leah Goodman at 1:55 PM 2 comments: 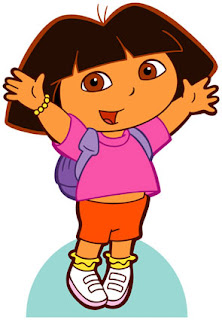 Following his success with running a presidential campaign by stealing cartoon character Bob the Builder's slogan of "Yes we can!" Obama has been hard at work figuring out how to wipe out airline terrorism. He has it all figured out now.

He will be using a clever take on Dora the Explorer's slogan of "Swiper, no swiping!" and will be hanging up signs that say "Bomber, no bombing!" in airports and on airplanes. The plan took a long time to come up with because:

1. Dora the Explorer is really high above his comprehension level.

2. The extensive changes to the slogan were quite complex for Barack Obama and his team.
Posted by Leah Goodman at 11:47 AM No comments: