Tonight, for the first time, Yaakov was able to feel the baby kick!

There weren't any good pictures from the ultrasound but everything is good.
Posted by Leah Goodman at 2:37 AM No comments: 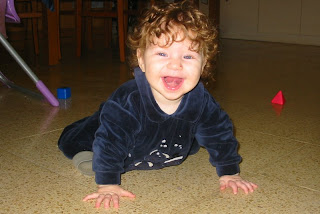 I know I've been a little neglectful of this blog lately. I didn't even tell y'all about my successful shopping trip last week. I picked up two nice shirts for Yaakov, a cute fleece jacket for me, and ten hangers... all at a great price!

My sister is teaching me to be a better shopper. More importantly, I got to spend the day with Nome Nome Mickey Mouse. (also known as Naomi Hallel Inbar)

She's a real delight these days. She's just started saying her first few words: Mom, hi, bye, and cat.
Strangely "cat" was also one of her sister's first words. I guess it has to do with having a cat in the house. It was amusing when she said "cat" in a shop, and we looked around and found a picture of Tigger on the wall. I guess she recognizes the felines as members of the same family!

The other news from around here is that we went to Ikea and we got lovely Ikea couches. Unfortunately, they didn't have the covers we wanted, so we are currently leaving the couches wrapped in plastic and cardboard in our living room, and waiting for the covers to come in. Our living room is, as a result, sort of a huge mess.

Anyway, today I have another exciting ultrasound. Hopefully tomorrow, I'll be up to blogging about it.

All the best,
t.c. Goodman!
Posted by Leah Goodman at 5:47 PM No comments:

Yesterday, my parents, as professional tour operators for Shai Bar Ilan Tours, went to IMTM, "International Mediterranean Tourism Market" the Israeli conference for tourism professionals. Being good parents, they asked if I wanted to attend, and I attended the conference in the capacity of their assistant.

The conference was very cool, although a lot of the "freebies" were either wine or beer, which was somewhat limiting, since I'm pretty good about abstaining from alcohol when pregnant. In addition, one very cool exhibit was a miniature version of the Jerusalem Time Elevator. I couldn't go in it (there was a whole ride) b/c it's not recommended for pregnant women...

Still, I got some neat keychains, a few pens, and a cup of hot cider with cinnamon. The highlight of the day for me was that one of the Israeli exhibitors was advertising a nature experience, and had brought a basket of ducklings. One of the ducklings and I bonded. It's not as soft as a hamster, but since Mishmish (our hamster) finds humans completely terrifying, I haven't picked her up in many many months - She escaped from her cage and I had to pick her up to get her back in. She bit me pretty hard, and I kinda lost my interest in her... Anyway, back to the duckling... it was very sweet, and had this cute little miniature bill (which was how I knew it was a duckling and not a chick). My mom took a picture... 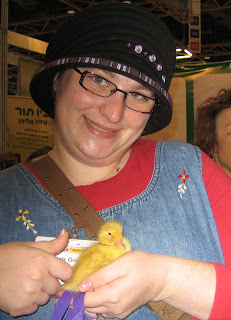 So anyway, after the duck and the cider and stuff, I sat down for a while and then we got back on the train, went back to the airport, got back in the car...

And my fingers had a fight with the car door. To be fair, my fingers were out of place. On the other hand, the car door really didn't have to fight so dirty! After a blood-curdling shriek, my parents took me to Terem, the local emergency clinic. Two of my fingernails are broken, which means I'll have to have the acrylic removed, let the nail heal, and have the acrylic replaced. The removal part is loads of fun. It involves soaking the fingers in nail polish remover for many minutes. That would be ok, but... there's a small cut that runs all the way through, and acetone on broken skin is a lovely idea... for torturing terrorists.

On the bright side, the bones aren't broken. The fingers aren't swollen. The typing is darned slow, because I can't use two of the fingers on my right hand. But this too shall pass.