Two years ago today, I woke up early. I got my nails done. I had my hair and makeup done. I fasted. I prayed the special mincha (afternoon prayers) for Yom Kippur. I had my picture taken dozens of times.

Oh, and I got to take Yaakov home at the end of the evening!

It's been a great two years, and I can feel that this is only the very beginning.
Posted by Leah Goodman at 3:00 PM 6 comments: 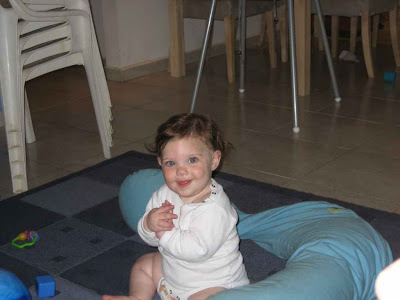 Today Kinneret sat herself up from a crawling position for the first time.
She makes progress in a crawling position, but doesn't exactly crawl.
She turns from her stomach to her back and back to stomach, but she needs to be motivated.

She claps her hands and says something like Yay!
Posted by Leah Goodman at 3:59 PM 3 comments:

Ten Things I Don't Get

A certain Princess but not Princess Kinneret Kangaroo has requested that people around the globe glob for charity. With such a great cause, I supposed I must help the war effort.

I have no clue what to say on a glob post, although I suppose a purim-related post could be appropriate. Purim is an interesting holiday. It celebrates how they tried to kill us and we won, so we should eat. Actually Haman tried to kill us, and Esther risked life and limb to save all of Am Yisrael.

It's pretty neat how one person managed to save a whole nation. She got stuck in this freaky situation where she was forced to marry a king, and she was basically not much more than a concubine. But not only she managed to make it work, she saved her whole nation.

I think there's something to be learned from that - that you can actually improve the world even from a crazy awful situation.

So I guess I glob with Esther.
Posted by Leah Goodman at 8:31 PM 2 comments: