Under Ground with Ephraim

Wednesday, a few weeks ago, my mother, Ephraim, and I went to Hadassah Hospital on Mount Scopus. The children's outpatient surgery unit (which they call Day Care) is underground. You go down just a bit, but it's easy to see that there are no windows. After we checked in with Dafna the nurse, we started to meet the other parents.

And then there was Tito. My mother and I had just seen the art therapist who had explained that we would be spending the day there so that the children having surgery the next day could learn about the process. I was lying on Ephraim's bed - he was lying in his stroller - reading a book.

There were a few young women there, volunteers from Betzalel, Israel's best known college of arts. They were using modeling clay. One made a giraffe, another made a pregnant woman, bent over backwards. Children sat at the table, requesting shapes.

Tito, though, was something different. Tito had a red nose, suspenders marked with inches like a measuring tape, and pants that showed boxers underneath. Tito held three roses. Ephraim was sleeping, but Tito didn't ignore me or my mother. He talked to us. 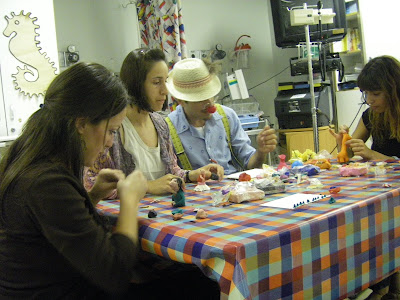 When Ephraim woke up, Tito amused him by blowing bubbles and by making a balloon jump in Ephraim's tiny hand. I talked to Tito. Some of those near and dear to me are quite clownish, and one of my favorite brothers (I have 3 favorites) has been known to put on a red nose and head for hospitals himself. Yaakov isn't quite a clown, but he does a fair bit of clowning in his show. Moreover, a good friend of his, Charlie is a bona fide clown, and he did some serious(?!) clowning at our wedding.

Thursday morning, we arrived at the hospital at 7:30, got coffee (awful) and pastries (decent) and went to the children's "day care" unit. We were greeted by Dafna, the nurse. Ephraim and some other children had their temperature taken. One of the children dropped his thermometer and there was some discussion of cleaning up the mercury.

I went to the family waiting room, and tried to read. I pumped some breastmilk for Ephraim, remembering that last time he had surgery, he couldn't nurse for quite some time. I went to get something to drink, and when I came back, my mom was gone. I went to find her in the recovery room, and she was already feeding Ephraim my milk.

She finished feeding him the little bit I'd pumped, and then I held him, nursing him. He was able to suck, unlike the previous time. He was very calm in my arms, very quiet, but he was nursing.

We waited for a long time, and they sent us back down to the basement where the children's outpatient surgery ward is. We talked to other parents there, and we waited for Ephraim to be able to come back home. 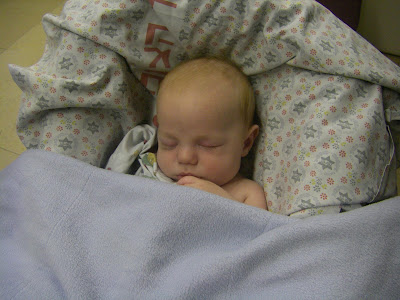