So this whole week Yaakov's been working with a group of people from around the world, and things have been seriously hectic. He's been getting home at about 10:30 and collapsing...

So today I came to his work and had dinner with him. I also ran a whole series of errands in Jerusalem, which was good, because some of them have been on hold for a while.

So now I'm at his office, waiting for him to finish up so we can head home...

There's a little bit of news. The yaakov-and-leah site is gone... I wasn't editing it and doing stuff with it, so I decided to let it go rather than pay to keep it alive when it isn't really accomplishing anything.

My parents are now tour operators for an all-kosher/shomer Shabbat trip to China. For more information, you can write to DrSavta at Gmail dot com. The tours are available in Hebrew and English, and include 3 kosher meals a day. The tours leave from Israel, but if you're not in Israel, you can make arrangements to meet the group in China. My parents have taken the tour once, and co-guided once, and they've really enjoyed it immensely.

I'm in need of work. I write content for websites, translate from Hebrew to English (but not the other way), and edit English text.

If you have work for me, leave me your email in a comment, and I'll write you back. Since I moderate my comments, you don't need to worry about your address being posted for spammers. If you need receipts, let me know. I haven't gotten receipts yet, b/c I'm not getting enough work to justify it, but I could probably arrange it within a few days if necessary.

Both Yaakov and I are still a little wiped out from our battles with various virii, but we seem to be doing better. Half of Yaakov's company is down with similar issues, so no one was particularly upset by his missing a week and a half...The particular bug that got him seems to be very strong. Thank G-d, I didn't get the fevers he got.

Thank you so much to those of you who offered help and support while we were sick. A special thanks to both the Epsteins and the Hess family for offering grocery help. We really appreciated the offer.

In Sickness and in Health...

I'm making chicken soup for Shabbat, because Yaakov and I have been pretty sick this week. My sinuses have been congested and he's been coughing, sneezing, and running a fever.

I'm feeling a bit better, but not enough to feel like a human being. It's been a rough week. On Sunday, Yaakov came back from France. He arrived in Israel around 8pm, and went straight to work. When he finally came home, I was mostly unconscious and quite annoyed that he didn't just get into bed and leave me alone until morning...

He woke up with a fever Monday morning, and I made us some tea. All day long, people from his work kept calling and asking for help, and Yaakov tried to help between cups of tea. Tuesday, I dragged us both to the doctor, and the doctor said he had an ear infection and gave him all sorts of nifty medicine. As a pregnant lady, all I could have were nose drops - the kind that sting when they go up your nose.

Tuesday evening was my nephew Tzvi's Bar Mitzva party. We went, and between the two of us, had enough onion soup to feed the population of a small African country. Then we moved in on the tea. I think there were some other people there, and I remember some stuff with harmonicas and a recorder. There was also some kind of skit which I hope was well videotaped, because everyone was laughing and I was groping around for another tissue. I think Tzvi was practicing his sedra (Torah reading) and his siblings were trying to make it difficult for him.

I think I'll try to digitize it and put in on YouTube.

Anyway, it was a lovely Bar Mitzva! We only wish we'd been fully conscious for it.

Wednesday and Thursday, we spent mainly sleeping, and this morning, I finally forced myself to go grocery shopping. Chicken soup is a-boiling. It's filled with all kinds of good stuff like rutabaga and Jerusalem artichoke and carrots and celery and onion (and some chicken).

I hope that tomorrow, I'll be well enough to go to the party in honor of my neighbor's new baby daughter. Today, I saw the baby (from a good distance away - I tried to avoid breathing on/near her) and she's very very sweet and cute, which isn't surprising because both parents are fairly attractive and her big sister (2.5) could be a model.

In the meantime, I have to go finish cooking for Shabbat and check on Yaakov.

I am aware that I need to write more about my trip to North America, but right now, there's other stuff on my mind.

For example, Teddy Kollek passed away this week. I gotta say, I'm not an overly political person most of the time, and prior to 1995, when I made aliya, I had little idea of what was flying here in Israel except that it's a piece of land the size of New Jersey, surrounded by multiple Arab countries, and yet somehow, the Arabs expect us to divide it and give parts to Arab entities.

What I remember about Teddy Kollek was a movie called "Goodbye, New York.

" It was a pretty hokey movie about a New York woman who goes to Paris to escape her humdrum life, and ends up accidentally landing in Israel. The movie was made by Teddy Kollek's son, Amos Kollek, and I remember my parents all but screaming when they saw Teddy on-screen. The woman, played by Julie Hagerty, had just had all her clothes stolen. She tells her whole sob story to a man on the street (Teddy Kollek) who responds by saying "So tell it to the mayor." Since the movie was released in 1985, (when I was 7) the significance had to be explained to me carefully. Since then, every time I've seen the movie (which is on tv surprisingly often), I've loved that scene more than all others - even the banana eating contest.

Anyway, so that was Teddy Kollek for me. In 1993, Ehud Olmert won the election, and when I made aliya, there were still bumper stickers around that said "Ohavim Otcha Teddy" - we love you Teddy.

A little more recently, I learned more about Teddy Kollek. He was an incredible man, and he did so much for Jerusalem. He built Jerusalem up in the years after the reunification (1967) and helped Jerusalem become a modern city.

"David Ben Gurion declared Jerusalem the capital of the State of Israel in 1949. Teddy Kollek turned it into the capital, not by virtue of memories and prayers and longing, but by virtue of creation, construction, diligence, tolerance and the intolerance which lived in his body together.

"Teddy turned Jerusalem into the center of his existence. Yehuda Amichai wrote that it is sad to be the mayor of Jerusalem. He didn’t write it about Teddy, but about his predecessor. Teddy wasn't sad, he was glad to be the mayor."

This would be more significant to me if Olmert actually listened to himself once in a while. However, I doubt that statements like these will keep Olmert from re-dividing the city and moving Jews out of their homes even in Israel's capital.

So today, after Teddy Kollek has been laid to rest, I want to say thank you to him. Thank you for building a city we can be proud of. Thank you for your love and devotion to the holiest city on Earth. Thank you, and "Ohavim Otcha Teddy."

Posted by Leah Goodman at 3:41 AM No comments:

What's 3 Inches Long and has the Hiccups?

If you're expecting me to say "I don't know either, but it's crawling up your leg," then you're out of luck.

Actually, it's a baby. Well, okay, I think the technical term is fetus, but seriously, it has a head and a body and s/he's so cute!

I had a test today called a neuchal translucency. The test isn't very thrilling. They measure the fluid at the base of the spine, and if it's a lot, then there's a higher risk of serious birth defects. My risk of having a baby with Down's Syndrome (G-d forbid) has been assessed to be about 1 in 2000, which sounds pretty good.

The exciting part of the test is that to measure this fluid, they do an ultrasound. So here's what happens. I go into the office, and the doctor puts the probey thing on my abdomen. At this point, I mention that I have a tilted uterus, so he's probably going to have to do an internal thing. He kinda shrugs, and starts moving the probe thing around, and all the sudden, I can see a head, and a body and all kinds of moving parts.

So I go, "Oh my gosh! It's a person! Holy cow, it's moving. Oh my G-d! Oh my!" and the doctor is laughing. My mom and sister (Yaakov couldn't make it) are standing there in awe. It was incredible. The baby was moving around a lot. He (this reflects the fact that there are currently more girls than boys in my family, so the [faulty] statistics indicate that I should be having a boy, not any actual knowledge) seemed to have the hiccups, and he was moving his arms and legs a lot. I could see such cute eyes and a nose and mouth. I'm in shock. It took more than a little convincing to believe that the images I was seeing weren't a video put there to make me happy, but now, I really believe there's a baby in there. He's only three inches long, but he's really there! And he's beautiful. 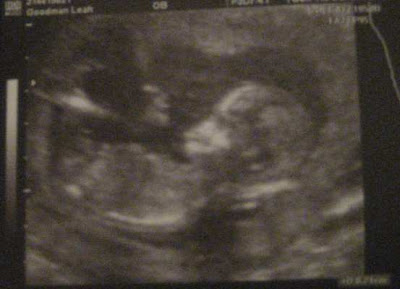 Sadly, this is the best picture the doctor was able to capture, because the baby kept moving!
Posted by Leah Goodman at 6:16 AM 1 comment: