Kosher in the Azores - Self-Catering for a Family Abroad

I hope you haven't come to this post hoping to find out that there's a nice, big Chabad house in Sao Miguel. I'm sorry to disappoint. There's basically nothing kosher.

Why did we go to the Azores?
The European Juggling Convention takes place in a different European country each summer. This year was Azores! Next year is Britain, but it's during the nine days, so we'll be giving it a miss, sadly.

If you're used to European products, then you know which things are ok throughout Europe. Unless you're careful about Chalav Yisrael, the milk, cottage cheese, yogurts (the ones which don't contain grape or gelatin) are all fine, and some ice creams - there's a Portugal list, but it's pretty bare.

As far as I know, there's no bread commonly available in the Azores which is ok (if you're Portuguese and know better, feel free to comment.)

Well, first I'll tell you what our set-up was. We're a family of five with some picky eaters and some very picky eaters. We rented a really cute bungalow with a fully-equipped kitchen. We used the fridge, microwave, kettle, and stovetop. There was an oven, but we did not use it, partly because of logistics of kashering, and partly because we're on vacation and didn't want to be baking.

So we had a complication, because we flew a low-cost airline BACK to Lisbon from the Azores (we flew from Israel via Moscow, but that's another story) and decided to only pay for two suitcases for that leg of the flight. As a result, we were somewhat limited in what we could bring back with us - which obviously affected what we took.

Fortunately, I had a pot and pan that were on their way out - I'd already bought their replacements, so we took those and threw them out at the end of the trip. I also bought a collapsible pot, more because I was in love with the idea than because I needed it.

I brought along small, cheap cutting boards for milk and meat, and bought knives with covers for both (because otherwise, you end up slicing your luggage, your fingers, etc)

I don't love eating off of disposables, and while they are readily available in supermarkets, they're not cheap and come in tiny packs. For dairy, we brought our IKEA Kalas bowls, cups, and plates:

We didn't bring along the plastic silverware because it's unusable. We actually separate the colors for meat and dairy, - meat is anything that includes red - pink, purple, and orange - and dairy is the rest - yellow, blue, and green - so it took two sets to bring service for 6. We're only 5, but you always need extras. We had old ones in meh shape. A friend recommended stainless steel, but these are light and cheap, and we ended up leaving them behind, which we wouldn't have done with metal.

I bought silverware at Max Stock - by buying the pieces separately (6 forks, 6 big spoons, 6 small spoons, and 2 packs of 3 knives at 5 shekels each), I was able to get usable silverware for 25 shekels. (we'll keep it for future travel.)

Can Opener (cheap, junky one)
Peeler (Good one)

For meat, we planned to have four meat meals - 2 each of the two Shabbatot we were away. So I bought 10 hard plastic disposable plates, and we washed 5 between meals each of the two weeks. I brought a little bit of disposable silverware, and we kept the extras from the airline meal.

I bought cheap wooden spoons/spatulas so that if we didn't have room to bring them back, we would just leave them.

What I didn't bring that I should have, so I ended up paying more because in Israel I know where to buy it cheaper - sponges for washing dishes and plastic boxes to use both as a mixing bowl and for storing leftovers.

Plastic zip-loc type bags could have been helpful, We bought them locally. 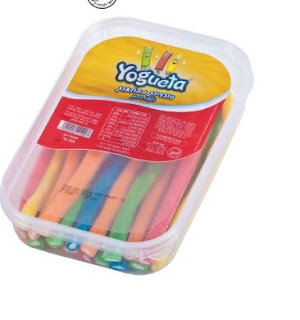 I had bought two packs of sour candy that came in little plastic boxes and they got some use.

(We ate most of the candy on our flights)

Should have brought a tablecloth. I ended up using a clean sheet as a tablecloth, but I felt like it was risking leaving stains that don't belong on a sheet, which would be rude to the owners of the place we rented. I was able to find disposables, but didn't think about it until it was too late for the first Shabbat.


What Food We Brought With Us

Foodwise - we brought some of the wrong things. If I were doing it over, here's what I would bring:

Cheese - we brought 2.4 kg of Emek cheese, and ate all of it. We froze it before we traveled and put it in an insulated bag, and it was still cold when we got to Sao Miguel about 36 hours later. (we'd expected to have a fridge in Lisbon, but that didn't happen)

Meat - 4 salamis and 4 packs of kabanos. That was just about the right amount. 1 salami and 1 pack of kabanos per shabbat meal.

Tuna - One of the Israeli companies just started packing their tuna in foil bags - It's called Tuna to-go. I brought 4 packs. My son loves pasta with just tuna (in oil), so each pack made two servings of that.

Bread - We took whole wheat bread, pitas, rolls, and wraps. If I could do it over again, I would have brought just wraps - probably around 8 packs. The kids ate them with nutella, with cheese and tomato sauce, with salami, etc. They're compact and you don't have to worry about them going bad.

Mana chama (noodles) My husband brought a bunch of them. In bowls. The bowls mostly got smushed and were unusable. If I'd done the shopping, I would have bought the ones in packets instead (and put them in the plastic containers I forgot to bring). They were really useful for the days when my husband and daughter were out a lot of the day, because they were able to get hot water easily at the juggling convention, and that's a pretty quick hot meal.

Majadera - my daughter loves it, and the premade mix is really good. We only made 2 packs, but I brought 4. Oops,

Wacky Mac - I only brought the cheese pack from a box of Wacky mac. We bought pasta locally, and I added a lot of butter to stretch it to be enough for most of a lb of pasta.

Spices - I brought garlic and salt in small containers. Oregano and onion powder could have been nice, too.

Tea Bags - My husband likes a particular type of tea. It makes more sense to pack 14 tea bags than to go searching once we're there.

Cookies and Snacks - because it's a tiyul, and tiyulim need snacks. (Tiyul is the general term for trip, but also more specifically used to refer to school hiking trips, where kids spend half the time hiking, 1/8 of the time learning about the place, 1/8 of the time hearing silly stories that are tangentially related to the place, and 1/4 of the time eating snacks. That may not be a great break-up because I think there's overlap) I bought a few types of cookies. If I were a better mom, I would have baked the cookies in advance, and packed them in one of those plastic boxes... but I digress.


What We Bought There

The main supermarket we went to was Continente, which was well-stocked.
Milk (there was no fresh milk, only UHT milk, on Sao Miguel, but it was really good. Apparently the thing about grass-fed cows is real)
Butter
Philadelphia Cream Cheese
Eggs - but they were brown and speckled, so not candled, and we ended up not really eating them because we found too many blood spots - I managed to find one clean one and ate it - all the others went to the trash :(
Rice
Pasta
Sugar
Kellog's cereals (UK Kashrut Certification)
Coffee (nescafe)
Sugar
Olives (in a jar)
Tomato Sauce (the kind that was just tomatoes and salt)
Soy Sauce (OU)
Ketchup
Mustard
Potato chips (plain potato chips are ok)
Betty Crocker pancake mix (OU)
Spray vegetable oil (OU)
Iced Tea, Coke, Fanta (watch out, some of the flavors have grape juice)
Nutella
Peanut butter (skippy!)
Nuts
Fresh Fruit (selection was so-so. there were excellent fresh pineapples grown on the Island, but I was the only one who was willing to eat it)
Vegetables - tomatoes were ok, avocado was fine, and cucumbers were American-style, barely edible.
Onions
Lots and lots of water bottles (the water where we stayed smelled bad - we used it for cooking and even for making coffee/tea, but we didn't drink it)
Napkins, toothpaste, shampoo, stuff like that.

In theory, we could have bought frozen salmon, but the seafood section had so many "interesting" things (eels, for example) that I couldn't bring myself to look through it. There are canned tunas and sardines that can be bought there, but again, it was a lot to look through, and most of it exceptionally unappealing. I was glad we'd brought our own tuna.


What We Actually Ate:
Breakfast - cereal or pancakes
Lunch - sandwiches - either cheese or nutella on bread, pita, wrap, whatever.
Dinner - Pasta and sauce with or without cheese, pasta with wacky mac sauce, pasta with tuna, pasta with cream cheese;
majadera, rice with soy sauce,
Fried onions - the onions were great, we ate some just fried and salted.

I hope that this list helps other people trying to find their own food. At the very least, I've got a packing list for next time we go away. :)

Little improvised thing I liked -  I cut up plastic water bottles to hold my sponges so they wouldn't be in direct contact with any of the kitchen surfaces.
Posted by Leah Goodman at 2:04 PM

Such great ideas.
I really like the IKEA plastic dishes and cups.
We improvised a lot like that when we went to Santorini this summer, and while I came prepared with many of the items you mentioned, one of the things I also sorely missed were plastic containers. I ended up buying 2.
Some additional things we brought from Israel, single serve cup-of-soup packages. The tomato ones were a good pasta sauce, and all different kinds of those rice and couscous mixes.
There was a nice fresh fish seller so we bought some for one evening meal.
I also precooked and froze schnitzel for Shabbat meals, and they traveled well and were good for making it feel like Shabbat.